Purpose: Brain-Computer Interface (BCI) systems are a new channel of communication between human thoughts and machines without the aid of neuromuscular systems. Although BCI systems exhibit several advantages, they yet have a long road ahead to reach a flawless state. For example, error occurrence is one of the problems in these systems, leading to Error-Related Potentials (ErRP) in the brain signal. In this study, Electroencephalogram (EEG) signals in the condition of system error occurrence are investigated. Since local information on the EEG signal channels alone cannot reveal the secrets of the brain, functional connectivity was used as a feature in this research.

Materials and Methods: In this research, 32 channel EEG signals with a sampling frequency of 256 Hz were recorded from 18 participants while interacting with a BCI system which has an interaction error. Two types of stimulus were used, including visual and tactile ones. Moreover, the Inter-Stimulus-Interval (ISI) was changed during the task. After pre-processing, brain functional connectivity was calculated between all channel pairs in four groups (visual, tactile, combined visual-tactile (ISI=3.5), and combined visual-tactile (ISI=2)) using Magnitude-Squared Coherence (MSC) measure.

Conclusion: This study shows that using brain functional connectivity features along with local features can improve the performance of BCI systems. 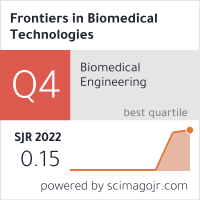